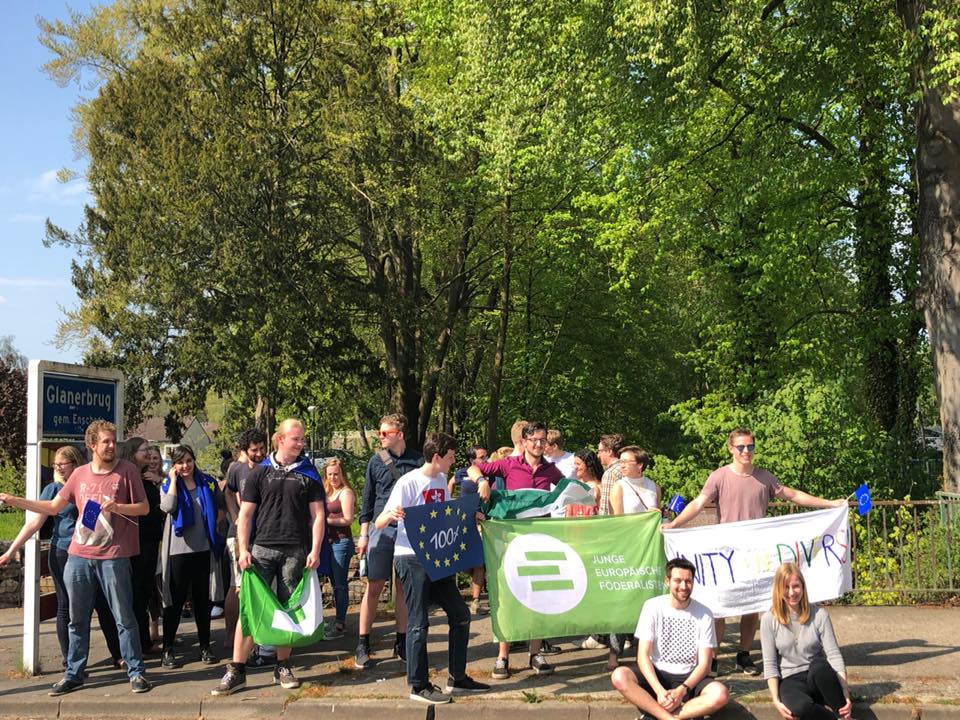 “Open the border – open your minds“ was one of the slogans of the banners that could be read when passing across the Dutch-German border in Glanerbrug on the 22nd of April. The cheerful crowd holding these banners consisted of young Europeans, or to be more precise, the Young European Federalists. United in the goal of having a federal Europe, they were celebrating Dutch-German friendship and open borders.

Even though the border is barely noticeable in Glanerbrug, border protection has increased in many other intra-European countries. With their posters, flags and banners, the Young European Federalists sought to raise awareness for that issue, as well as the issue of mental borders manifested in rising nationalism and prejudices of all kind.

The “European Border Party” was hosted by JEF Enschede and JEF Münster with the aim of bringing European citizens closer together and to invite to build up intercultural friendships. It certainly worked on Sunday, when JEFer from all over Europe used the event to meet each other and to discuss European politics. Besides German JEFer and JEF sections from Münster, Osnabrück and Cologne, JEF Netherlands was presented by the sections Amsterdam, Enschede, Maastricht and Nijmegen. Especially the latter, Nijmegen, which was officially founded just a week earlier, impressed the other sections with a high number of attendees. All in all, among the around 40 students from Dutch and German JEF sections were students from many other European countries whose culinary skills made the European picnic and barbecue truly diverse. After having eaten some Italian “Pasta al Forno” and learning how to play the German game “Flunkyball”, the day ended at the Oude Markt the Dutch way: with some Grolsch and Bitterballen.