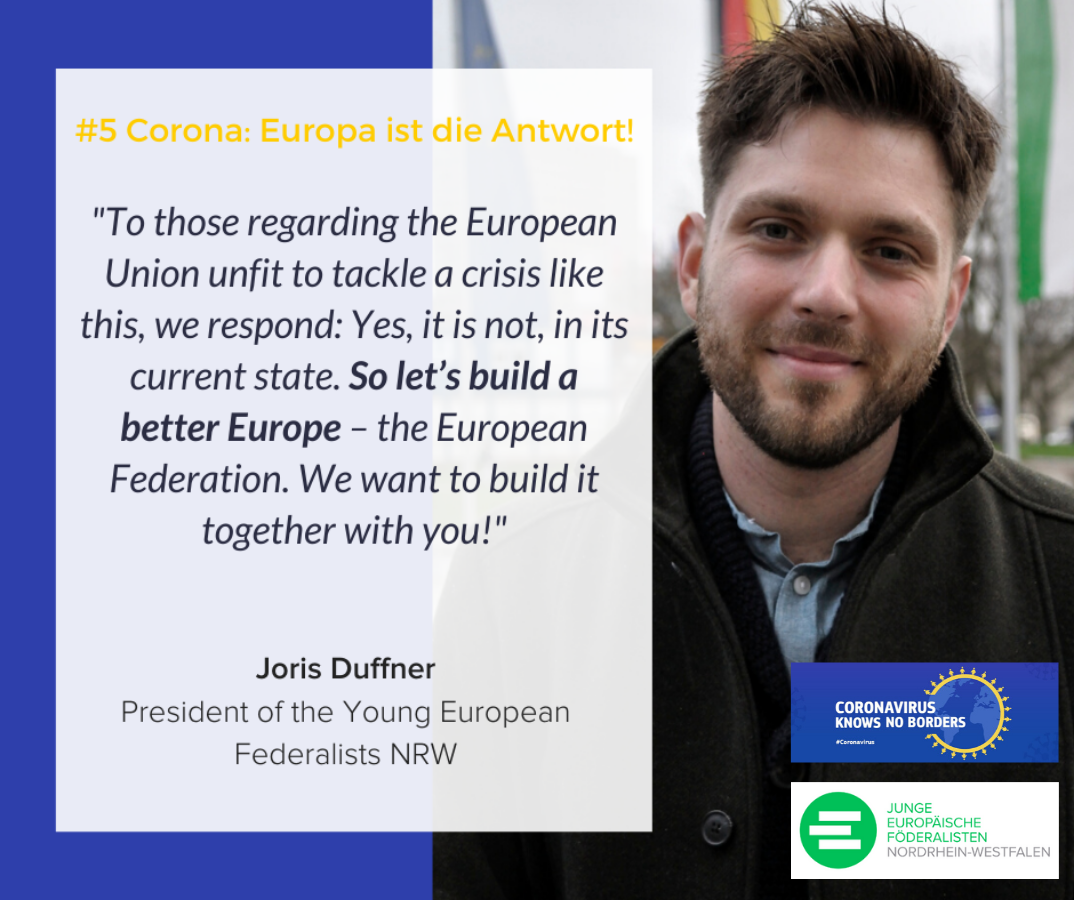 We can’t be certain yet, if the corona epidemic in Europe is significantly slowing down or a second wave will be approaching. But good news from the European countries being hit hardest give us hope to some extent. As we see this silver lining we can recognize it as a sign for the European Union to turn back to the status quo, or to finally march on to towards a renewed Europe. The crisis can be a turning point in European history. For better or for worse. Only a light breeze could decide on which side the coin will fall, in the end. Just now, European federalists should not lose focus on their ends. It’s upon us all to act now!

Strong measures to ensure a future Europe fitter for crises

As Young European Federalists in North-Rhine Westphalia, we first and foremost propose change in several fields of European policies, responding to the current crisis. In terms of fiscal policy, we see a joint borrowing system as an indispensable means. All member states are now called upon to cushion the economic slump through direct transfers and liquidity support.

Closed borders, we regard as a relic of the past with no real benefit in tackling coronavirus. They give us the illusion of control in the face of a situation that is difficult to predict, being merely are designed to reassure us and simulate the ability to act.

EU approaches in healthcare came much too late, mainly due to the lack of institutional competence. We therefore call for extended European authority in health policy and the expansion of existing mechanisms and strongly needed harmonization of strategies and conditions across member states.

Furthermore, the European pillar of social rights must finally be adopted as legally binding for all EU member states. Crises like the corona epidemic must not be able to intensify already existing social inequalities among the member states.

Political leaders on every level and in every member state should be strongly urged to campaign for those and other measures. They need to realize, that only a joint European effort will pave the way into a strong future for the whole continent. However, adaptations as such can only be seen a first step towards greater institutional change in the future.

Although political reform is urgently needed, we are fully aware that it will not be enough. Hearts and minds need to be won for the European idea again. We will need to cope with a fair amount of new euroscepticism, the corona crisis and handling it throughout Europe has promoted. The right narrative, the one leading us into a truly European future, needs to be shaped. We will not downplay the failures and shortcomings of the European Union in its current shape, but actively address them. We will not glorify the EU and its’ institutions, but confidently direct the path for reform, for a Europe more democratic, more inclusive, and more united.

To those criticizing a new European fiscal policy, arguing one would pay for one another in all over Europe, we say: That’s quite right, and we are gladly willing to support our fellow Europeans in countries in need. We will do so not only with thoughts and prayers, but with our taxpayers’ money.

Those feeling safer with closed borders, we ask: What borders do you really mean? Those around your town? Those around your district? Or those around European countries, differing a great deal in size and shape? To those wondering, why patients from Italy or France are getting healthcare in german hospitals, we simply reply: That should really not be any news at all. To those regarding the European Union unfit to tackle a crisis like this, we respond: Yes, it is not, in its current state. So let’s build a better Europe – the European Federation. We want to build it together with you!