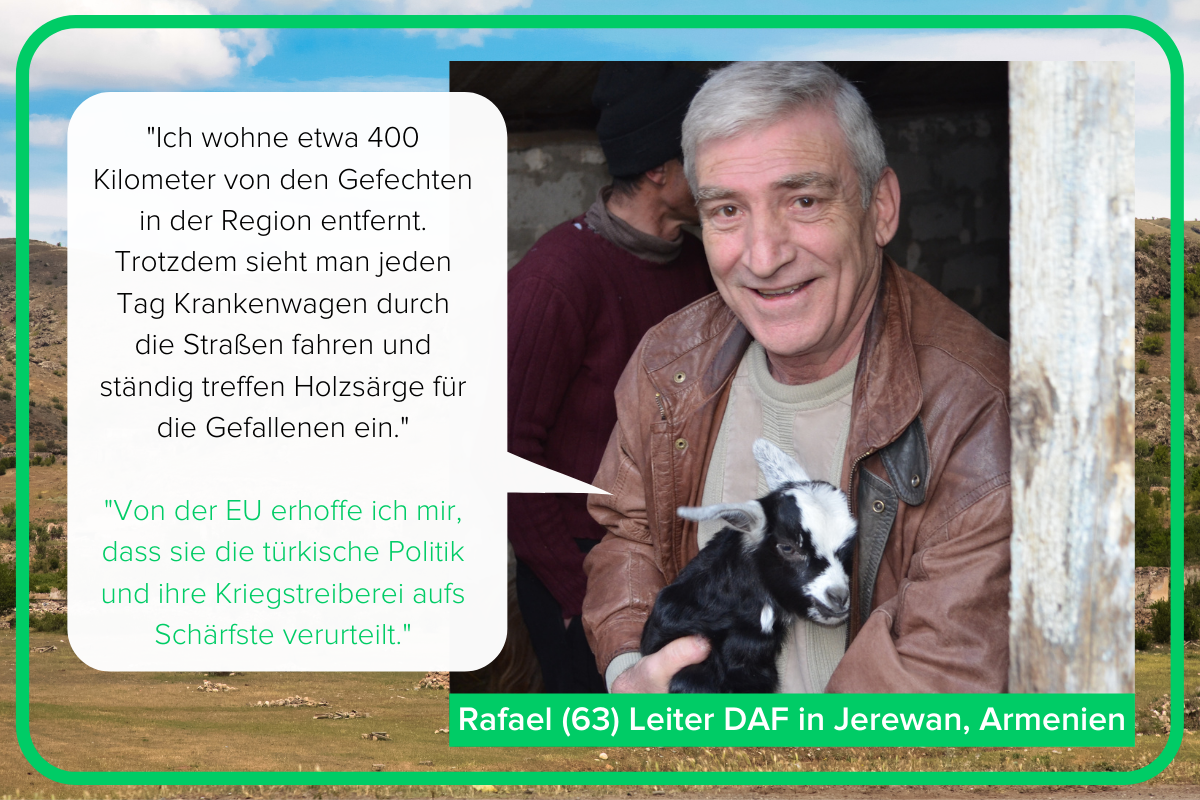 Today’s interview is with Rufat (27) works in Hamburg and did his Masters in European Studies. He grew up in Baku, in Aserbaidschan.

Rafael: Of course, Me and everybody else reacted very negatively and emotionally after the outbreak of the war. This war is not desired by the Azeris (Azerbaijanis) and the Armenian people, they have geopolitical goals from the leadership of the opposite side and Turkey, which want to spread their Islamic caliphate and this is a continuation of the genocide of 1915.

This war is not desired by the Azeris (Azerbaijanis) and the Armenian people, they have geopolitical goals from the leadership of the opposite side and Turkey.

I live in Yerevan, about 400 kilometers from the battles in the region. In spite of everything, every day you see Ambulances drive through the streets, many wounded are lying in the hospitals and you can constantly see wooden coffins of the fallen.

How do you deal with this war? What do you think about it?

Rafael: I am sad and angry about this war. It has already cost thousands of lives and is now destroying or traumatizing already several generations, since it will take years to approach each other again after a possible peace.

Do you see possibilities for a peaceful conflict resolution? How could this look like?

Rafael: The only solution to achieve peace – or at least a ceasefire, which lasted from 1994 to this year – can only be achieved by worldwide pressure from Europeans, Americans and Russian pressure on Turkey. Otherwise, many thousands more people will continue to die. Let us continue to send prayers to the dear God, so that one day this horror will finally end.

What do you hope for from the European Union to solve this conflict?

Rafael: First, I hope that the European Union will condemn Turkish politics and its warmongering in the strongest possible terms. They should withdraw their military advisor and mercenaries from Nagorno-Karabakh. Furthermore, Germany and the other European countries must use their veto to sell weapons to Turkey.

I hope that the European Union will condemn Turkish politics and its warmongering in the strongest possible terms. They should withdraw their military advisor and mercenaries from Nagorno-Karabakh.

At the moment, however, one can see that many EU countries are busy with themselves and therefore do not take a clear position against Turkey. But one should not forget that for example the Turkish lobby in Germany is very strong, understandable with 4 million German Turks, and Germany therefore does not want to take an aggressive tone.