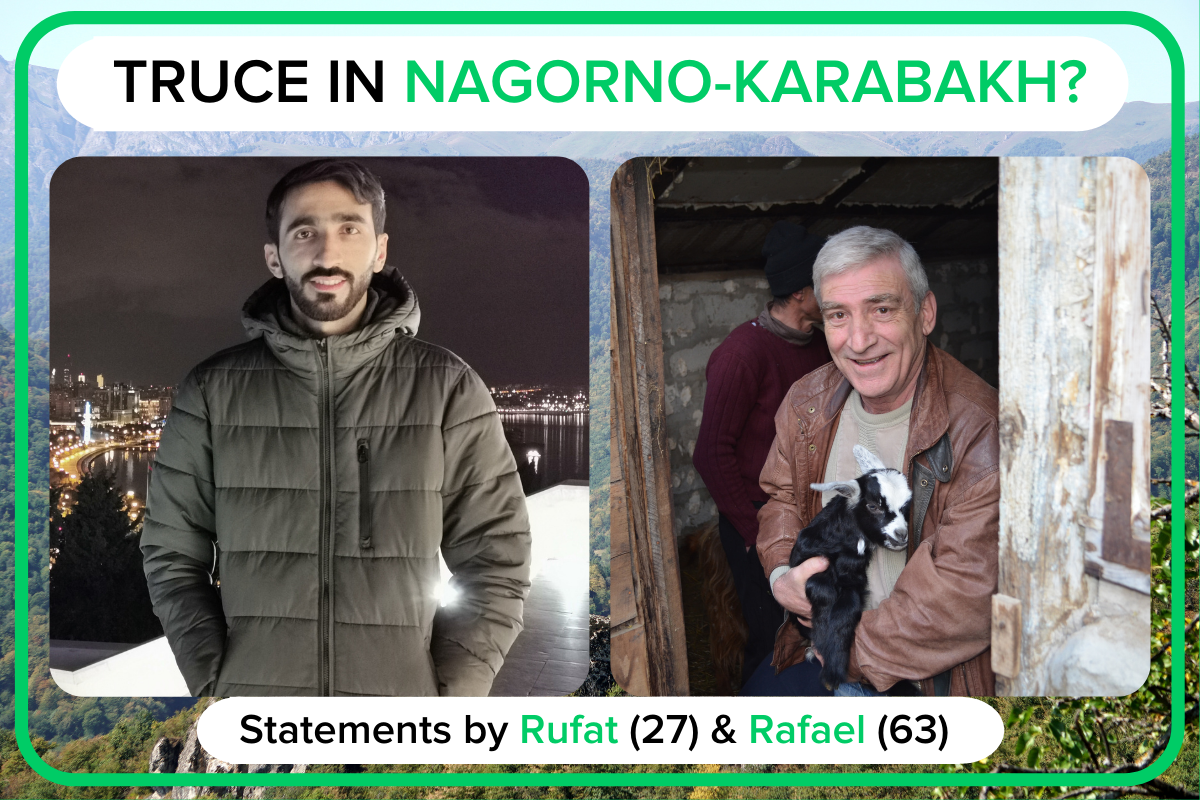 After more then six weeks of deadly fighting between Armenia and Azerbaijan over Nagorno-Karabakh, under Russian procuration a truce has been established between the two forces of Armenian Primeminister Nikol Paschinjan und Azerbaijani President Ilham Alijew. More then 2000 Russion soldiers are observing and protecting the truce compliance in the area.
But what will be the effect of the truce? On Thursday, 12th of November different media channels already reported protests in Armenia. Thousands of people have gathered in Armenia’s capital traise their voice against the agreement that gave territorial concessions to Azerbaijan.

Join our online event on November 17th to discuss the future and implications of this conflict here.

To get a better understanding of the conflict, we interviewed four people from the area on how their lifes are affected by the conflict.

All of these are personal opinions, not necessarily conntected to JEF NRW agenda.

Now two of them, Rufat from Baku, Azerbaijan and Rafael from Yerewan, Armenia have sent us their statements on the truce that are very different from each other:

Rafael (63) sees the ceasefire more as a fragile peace. He states plainly that the peace is rather an opportunity for both sides to gather new weapons, form alliances and for Russia to also sell more weapons.
He emphasizes: “The conflict has been going on for more than 30 years, peace will not be established over night. We still have a long way to go”.

Rufat (27) gives a more detailed interpretation on the impact of the truce:

“The ceasefire agreement (which is not a peace agreement) stopped the war immediately which is the biggest achievement after 44 days. Both sides must appreciate this fact. However in this ceasefire agreement not every detail is described explicitly. Many questions still must be officially answered.

From Armenian point of view, Armenians consider it as a total defeat. However, I wouldn’t call it like that because this agreement will make possible again Armenian’s life in Nagorno-Karabakh(NK) under the protection of Russian peaceful military troops.

As Armenian government chose the defeat only now they don’t have the negotiation power to necessarily get what they want. They could’ve had a better deal if they would have accepted a deal in the first days of war or even before the war. Unfortunately, the ignorance of the people, false assessment of the powers, wide spread of disinformation (as if they have a better position in war, Azerbaijan loses, more than 7000 Azerbaijani soldiers were killed, hundreds drones were shot etc.), led to the total disaster of Armenia and now people require the resignation of the government.

My personal point of view and which I find right is that Azerbaijan admitted the Russian militaries in order to preserve the security of Armenians who would continue to live in NK. Russia would be the only country under which Armenians would feel free and understood (speaking Russian). It also increases the international image of Azerbaijan keeping the promise and proving that the goal of Azerbaijan is not an ethnic cleansing but a situation where both nations can live together without having fear.

Consequently, history one more time revealed that occupation of another country’s sovereign territory is not acceptable and has no future. Winner is always the one which does not live in the past but focuses on the future. This war was not only between Armenia and Azerbaijan but it was also the war between “3000 years history” of Armenians vs. International law (UN 4 resolutions); old military system vs. high tech; disinformation and populism (and they officially admit it) vs transparency; and finally the true fact of ethnic cleansing (by Armenians during 1991-1994) vs. securing the accommodation of Armenians in NK by cost of inviting the Russian military troops to Azerbaijan.”