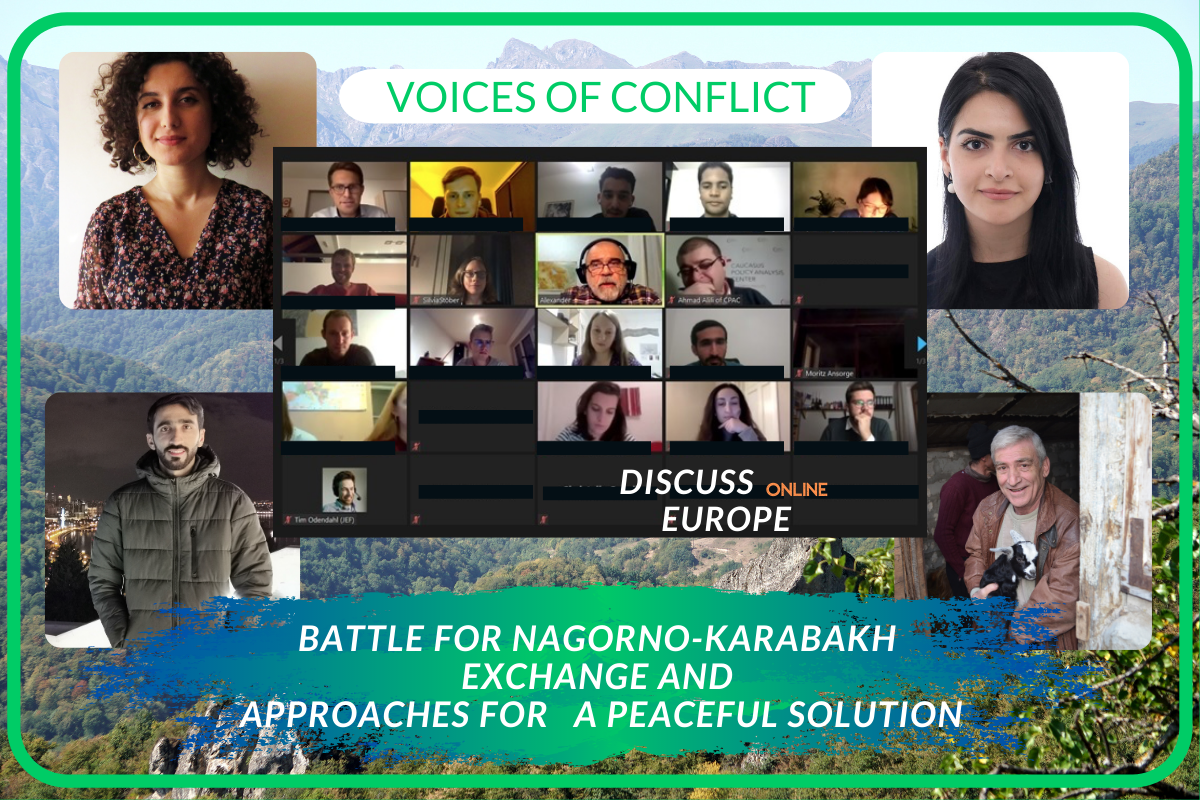 A European Nagorno-Karabakh as a peaceful conflict resolution?

For decades, the conflict over Nagorno-Karabakh in the Caucasus has been the subject of repeated disputes between Armenia and Azerbaijan. In recent weeks, the conflict has escalated. War had been going on since the end of September, but has now been provisionally resolved with Russian mediation and the deployment of Russian peacekeeping troops to secure the embattled region.
Under international law, the region of Nagorno-Karabakh and the surrounding provinces belong to Azerbaijan, but have been occupied by Armenia since 1994. The Republic of Arzach proclaimed in this area is not internationally recognized. The peace agreement that has now been brokered is a setback for Armenia: It has to cede many occupied territories to Azerbaijan and is connected to the remaining area around the regional capital Stepanakert only by a road secured by Russian soldiers, the so-called Lachin Corridor.

JEF calls on EU to act

The conflict was and is hardly present in the European and international public, although attacks on civilians* and civilian facilities were reported daily. JEF Europe and JEF Germany have therefore written an open letter to European politicians* calling on them to commit themselves more strongly to conflict resolution and to condemn Turkey’s unilateral interference in the conflict on Azerbaijan’s side.

Open letter on the situation in Nagorno-Karabakh

The conflict shapes generations on both sides – perspectives of those affected

In parallel, JEF NRW and JEF Bayern conducted interviews with people from Armenia, Azerbaijan and Nagorno-Karabakh as part of a campaign on the conflict, in order to give the affected people a voice.

For example, Flora (21), who comes from Stepanakert, reported on her flight to Armenia, the additional burden of the Covid 19 pandemic, the difficulty of coping with everyday life during the war, and friends who are missing at the front. Veronika (24),, who lives near the capital of Armenia, Yerevan, told of her concern that the war might also shift to the territory of Armenia, her commitment to refugees from the embattled region, and the challenge of making the conflict increasingly part of everyday life. Rafael (63), who lives in Yerevan, believes that the war is not wanted by the population on both the Azerbaijani and Armenian sides. The war has also been very present in Yerevan because of the many wounded and constantly arriving wooden coffins. Rufat (27), who grew up in Baku in Azerbaijan and currently lives in Hamburg, reminds us that this conflict has gone on for far too long and is historically charged. All are losers of the current war. All interviewees wished for a peaceful solution of the conflict, even if it should be differently arranged: The pro-Armenian interviewees think that the people in Turkey and Azerbaijan should position themselves against their governments and that the EU, the USA and Russia should sanction the behavior of Turkey and Azerbaijan. On the other hand, as an Azerbaijani, Rufat hopes that Armenia, Azerbaijan and Georgia will finally realize that they share common economic interests as a link between East and West. A corresponding economic policy promoted by the EU could thus contribute to conflict resolution.

Shaping future coexistence – but how? Discussion contributions from experts

Immensely interesting discussion on the current developments in Nagorno-Karabakh

A region must grow together again

The debate, with around 70 participants* from all over Europe, focused on the possibilities of peaceful conflict resolution. The participants agreed that the current conflict resolution is not a long-term solution. According to Alexander Iskandaryan, Armenia agreed to the agreement in order to end the current war and humanitarian crisis. According to several independent reports, however, Armenia’s approval is also based on its clear military inferiority to Azerbaijan. In order to settle the conflict in the long term, Alexander Iskandaryan continues, the mindset of the population must be changed to counteract polarization. This will not be achieved by drawing borders, but by promoting the coexistence of the various ethnic groups in the region: “Nagorno-Karabakh is not only about the land, it is also about the people.”
Azerbaijan also wants to promote concepts of living together, emphasizes Ahmad Alili. Azerbaijan does not want to marginalize the Armenians in the areas now controlled by Azerbaijan and will therefore seek dialogue with the population. He explains that Azerbaijan saw the war as the only way to demand that Armenia comply with international law, which had been disregarded for decades.

It is clear to see that the conflict is historically charged, the causes reach far back into the past and would be interpreted differently by both sides, according to Silvia Stöber. The fact that the OSCE Minsk Group, which is responsible for the region, has hardly contributed to conflict resolution is, according to the experts, justified by the current focus of the countries and the EU on the Covid pandemic. The USA is also busy with the presidential election and there is currently a leadership crisis within the OSCE. The experts from Armenia and Azerbaijan were also united in their dissatisfaction with the role Russia is now playing in the conflict: According to this, Russia is primarily pursuing geopolitical interests and is now present in the region through the so-called peacekeeping forces.
According to Silvia Stöber, the EU must learn a language that is understood by both Russia and Turkey in order to actually contribute to conflict resolution and exert influence. From the EU perspective, this also applies to the other geopolitical conflicts, for example in Libya or Syria. In the conflict over Nagorno-Karabakh, the EU must therefore make greater use of its soft power in terms of education, rationalization of the conflict and exchange offers.

An interesting food for thought was provided by the participants* in the discussion when they put Sweden on the agenda. The Scandinavian country will head the OSCE Minsk Group from 2021 and is recognized as a neutral mediator on the Armenian and Azerbaijani sides. However, before the status of Nagorno-Karabakh under international law can be finally clarified, it needs a common narrative. Only in this way could polarization be countered, even if it were difficult to implement in practice. Then, according to Alexander Iskandaryan, a referendum on the independence of Nagorno-Karabakh accepted by all sides could be held at the end of the conflict.

The expert inside discussion as well as the interviews with the people from the region make this clear: A solution accepted by all sides will take time. The EU can strengthen its influence through soft power and – as the experts stated – as a continent with an equally eventful history, can serve as a model for peaceful conflict resolution.